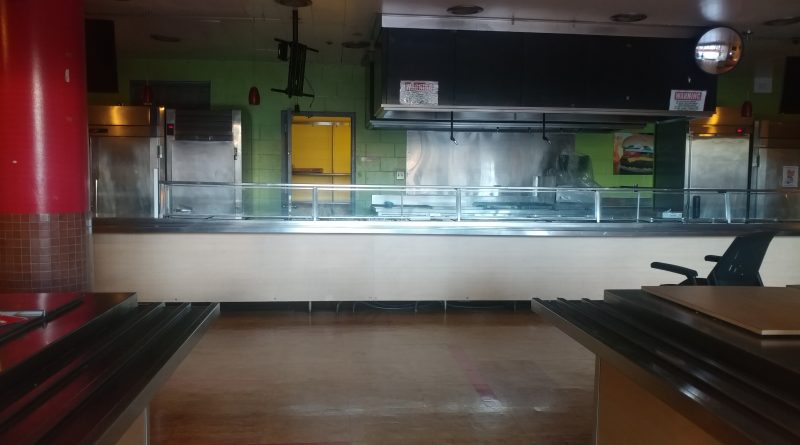 It’s already a well-known problem on campus that there is nowhere for students to find substantial food on campus. The cafeteria was shut down last year due to a lack of contract with the food vendor, Aladdin and at some point, due to the lack of proper care in the kitchen area. York’s cafeteria had failed their annual health inspection.

The school failed to enforce the proper protocols, that any school cafeteria has to go through to prevent students from getting sick from the food that is provided to them. It is uncertain whether the lack of cleanliness was due to a lack of funding or a lack of care. Either way, the cafeteria is no longer an option for students, faculty, and staff members at York.

The only thing left inside the college was the cafe on the second floor; the Starbucks. Starbucks was managed better than the cafeteria, probably because there is no cooking on site. The pastries are brought in already prepared. All that had to be done was making sure that the surfaces were wiped clean, and ensuring that the machines were functioning. It was not a cafeteria, but it was better than nothing.

Then came the ultimate let-down, the Starbucks shut down due to a non-renewal of contract between Aladdin, the food vendor and the college. Because of this inconvenience, the best place to get food on campus is now the vending machines or the free canned food provided at the school’s pantry.

For some time, there were food trucks which came to the school periodically. The school had no formal agreement with the trucks, so they were not mandated to with a set schedule and students are often made aware on a short notice of their absence or presence on any particular day. As a result,  many students have to get food from fast food restaurants located on Jamaica Avenue.

To be fair, Jamaica Avenue has a splendid variety of restaurants to purchase from, however, having to constantly leave the school for a meal could get tedious as well as expensive. The solution to all these is for students, faculty, and staff members to be provided with a convenient place where they could get a quick bite to eat, or even a cup of coffee on campus without having to walk two blocks down.

Now, that was somewhat rectified with the recent re-opening of the Cardinal Café. Granted, having the opportunity to get a cup of coffee on campus to get through the day is awesome, but the community wants more. The Cafe has limited selection of food ranging from pastries, to fruit cups and cold sandwiches. The Cafe as the only option creates a monopoly where a cup of coffee and a blueberry muffin amounts to almost $10. That’s about the same rice as a Chipotle burrito with a side of guac. This is not fair to students who are already dealing with food insecurity.

Speaking of Chipotle, we would like hot food, please. Simple foods are simply not enough.

The College has claimed that the cafeteria cannot be reopened because it is waiting on the University to provide a university-wide vendor. The University has been in the process of procuring a vendor since 2018, it is now 2020. How long are we supposed to wait? Why should we wait? It makes no sense that the college could not seek out a temporary vendor with the agreement that the contract will be terminated once the University procures its vendor.

The college community should not have to decide between going out to get a hot meal and staying on campus to study/ finish off projects. And, we will not be satiated with sugary pastries and coffee. (The fruit cups, while healthy, don’t work if not accompanied with a meal.) Action needs to be taken to get a temporary replacement while we wait for CUNY.

When you really think about it, it is not that much to ask for. When the cafeteria cemetery is finally reopened, it would be a breath of fresh air for a majority of students and faculty on campus.