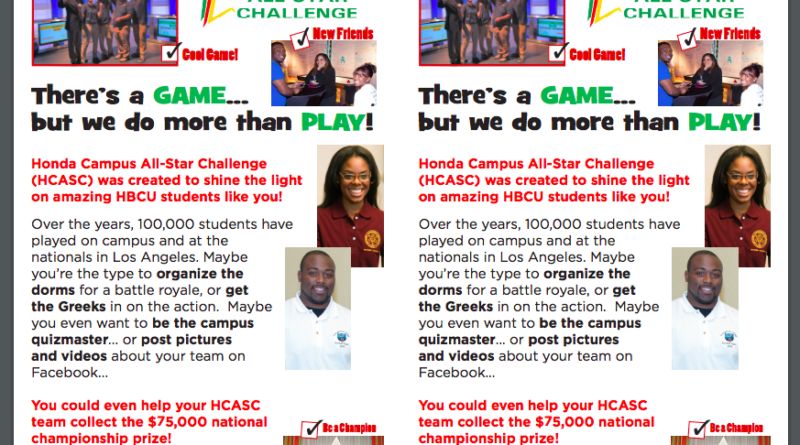 Farley Mawyer, York College Professor of Mathematics and Computer science, is searching for students to compete in the Honda Campus All-star challenge for a chance at splitting $20,000.

Mawyer came to Pandora’s Box in hopes of finding intellectual and well-rounded students who would like to compete against other colleges for an all expensive trip to Los Angeles. Past competitors experienced an all inclusive trip to Disney World and the Epcot Center.

“We are hosting a pre-national qualifier the first weekend in February. Different people will come to York to compete. 48 colleges go to the national championship in Los angele,” says Mawyer.

Mawyer coached the team since 2006 but the competitions started 28 years ago. This battle of the minds was geared towards high populated black universities and York’s outreach in the community made the college eligible to compete.

“It’s an experience of a lifetime. I don’t know anyone who has ever gone and hasn’t loved it.” said Mawyer. “I’m looking for the brightest and enthusiastic York students who want to have an all time experience at Honda’s expense.”

The competition is a way to network with other colleges and competitors from around the country.

Students who are well versed in science, history, and daily news are encouraged to participate. Mawyer describes the questions being similar to the jeopardy game with a mix of the brightest students on campus.

Besides the fun, there is a lot of competing to become state finalist. A team of four students will be chosen to create an all-star team at the Honda Campus All-star Challenge. Students who are interested need to take the power surge test administered by Professor Mawyer in office AC 2c02 .

The 15 multiple choice and 5 short answer quiz determines if they are qualified to make the team. Tryouts for the team last till January of 2017 but positions on the team are limited.