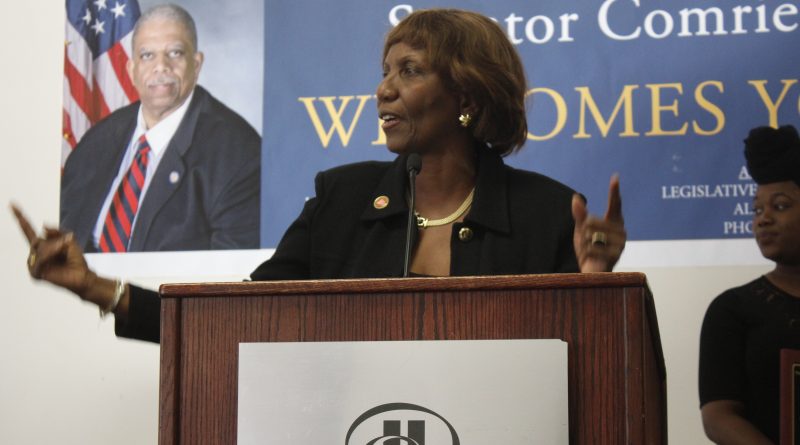 York College President Marcia V. Keizs was recognized by New York State Legislators for her work in education at the 46th Annual Awards Ceremony for the Congressional Black, Puerto Rican and Asian Caucus in Albany.

Comrie presented Keizs with the Barbara M. Clark Award for Excellence in Education. Clark was a former assemblywoman from Queens who strived to improve public education by serving as the Chair of Education on the Caucus Committee until her death last February.

Keizs attributed her success to the leadership of Clark and her predecessors.

“Barbara Clark devoted her life to helping the students,” said Keizs. “Every student she encountered she cared for. I admire her for that. I pledge to our 8,000 students and Southeast Queens friends that I will continue to build on the phenomenal legacy that those before me have built. People like Milton Bassin have brought York to the intellectual anchor of the community.”

She also said that the students are an integral part of her achievements.

“My first priority is the students,” said President Keizs. “The students helped establish this school. The great work of the students is why I am proud to do my job everyday.”

In addition to overseeing the college, Keizs also serves as the CUNY representative on the American Association of State Colleges and Universities, the Council of State Representatives, the boards of the Morris Heights Health Center, the Greater Jamaica Development Corporation, Gov. Andrew Cuomo’s Regional Economic Development Council, and the American Council on Education’s Commission on Effective Leadership.

Keizs is the also the founding editor of the New York Carib News.

She became the college’s sixth president on Valentine’s Day in 2005 and recently celebrated her 12th anniversary at York. During her tenure, Keizs has led the completion of multiple facility renovation projects that have enhanced the campus environment including building an appropriate technology infrastructure. Keizs continuously lobbies in Albany on behalf of improving academic performance and CUNY-wide issues.

Some students believed that Keizs has made adjustments by tightening the belt in response to government policy changes  and helped make educational advancements.

“She’s really a true leader,” said Dupah Gobin, the vice president of York’s Student Government Association. “For someone with her knowledge and achievements, she could have moved onto better things. When the tuition was going up, she went and fought for us. Our budget is too low. She still fights for us. She continues to come to Albany like every other month to lobby for us.”

“You may not always see her in school, but she’s always there and it’s obvious that she cares about us. She attends every rally for students and always seems to take action when there has been. She does a lot more internally that students take for granted. She deserved to be appreciated because she still gets her paycheck and has her doctorate at the end of the day so she doesn’t have to do all of this.”