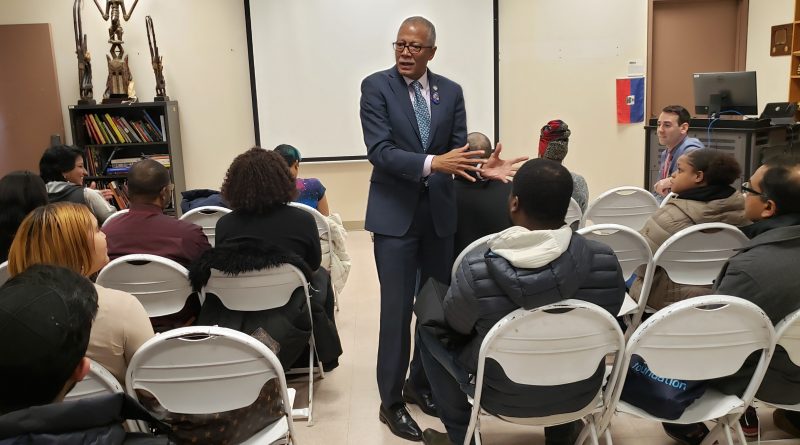 Jackson, whose district zig-zags up the west side of Manhattan from Midtown up to Inwood, came to York to raise awareness about cuts in state spending for public education. Jackson said that while education is his priority, it is not the priority of the New York Senate right now.

“I’ve been told that we’re going to have about 2.6 to 2.8 billion dollar gap for medicaid spending this year that we have to deal with at the state budget,” Jackson said. “If we have to deal with that, in my opinion, many other things are not going to be dealt with possibly including education.”

“That’s new priority that has to be dealt with, because to put it frankly, because many people will die,” Jackson added.

The FY 2020 Executive Budget for the state of New York allocated $7.6 billion in funding for higher education, an increase of nearly $143 million from last year’s budget. However, despite this funding The State University and the City University of New York still require additional funding.

Jackson said despite this, he is still going to push for higher funding for education. The Higher Education Committee will hold a meeting on Dec. 16 where there will be a discussion about the amount of money needed for capital and infrastructure.

“We expect people to come in and give testimony for their needs of capital needs for their district and their school,” Jackson said. “All of the information from that will be compiled so we can then use that to push for more money in the capital budget next year and operating money. We hope that will work.”

Born and raised in Manhattan, Jackson is well known for his fight for education.  He first got involved by joining the Parents Association of his daughter’s school. He was then nominated  to be the Association’s representative to the local community school board, where he was elected for five, three-year terms of office.

As a community School Board President, he helped launch the Campaign for Fiscal Equity school funding lawsuit against the State of New York and walked 150 miles to Albany for 8 days to highlight the cause. He and the community school board won the court judgment which awarded $16 billion- $11 billion in capital funding and $5 billion in operating expenses- for New York City public schools.

The money has yet to be fully disbursed by the legislature.

Following his career on the school board, Jackson ran for the New York City Council in 2001 and was re-elected three times, where he continued in his fight for education. As a city councilman, he contributed to the creation of over 4,000 new openings for Pre-K education in New York.

Jackson was a part of the blue wave in 2018 that enabled Democrats to take control of the State Senate. But despite the Democratic majority, Jackson acknowledges the struggles lawmakers face trying to get more funding for education. He claims that the Democrats do not have enough power to veto the governor’s reluctance to provide more funding for education without getting the highly unlikely support from the Republicans.

Jackson urged students and officials from York College and others in CUNY and SUNY to come forward at one of the higher education committee hearings, especially the Dec. 16 meeting. He invited Interim President Berenecea J. Eanes to come and give testimony in front of the committee about York’s need for capital and infrastructure.

“Like anything else, keep the pressure on all of us,” Jackson said. “If you’re a CUNY student or a SUNY student, communicate with your legislators, this is important. We need to increase funding for CUNY and SUNY.”