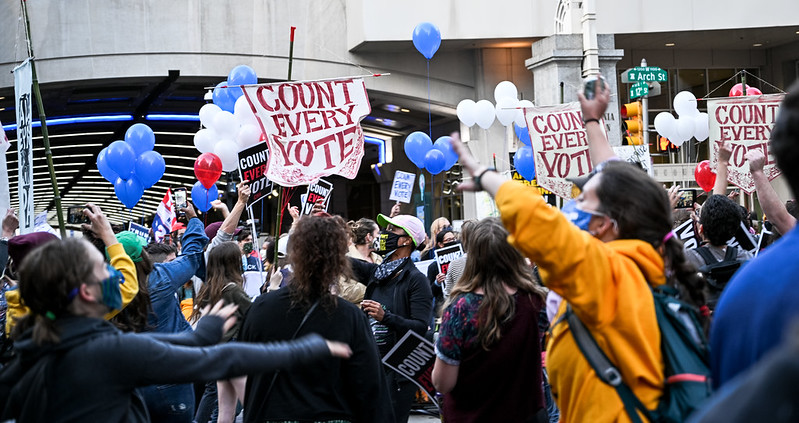 Voters are not so happy about mail-in ballots Photo By | Flickr, Joe Piette

In the run-up to Election Day New Yorkers across the five boroughs cast their votes early. More than ever before, citizens across the nation used absentee ballots to submit their vote this election due to the coronavirus pandemic.

Early voting turnouts broke all known voting records with over 100 million Americans casting early ballots as of Nov. 1, according to the U.S. Election Project.

The voting turnout this year has been unprecedented, unlike anything this nation has seen before. However, since many of these ballots are being mailed in, there has been heavy criticism from the Republican Party about the validity of the process. President Trump repeatedly asserted during the first presidential debate that mail in ballots would result in widespread fraud without any specific supporting evidence.

“I don’t understand what the issue is, I mailed in my last ballet during the last election and my vote counted,” said Abby Narvaez, 22, a Freeport, LI resident in a phone interview. “Mail-in voting has been a part of our democracy for centuries. President Trump is only saying that because he just wants to distract us and convince us to not vote. The process works. I have no doubt about it.”

Absentee ballots were first introduced during the Civil War for the 1864 elections between the incumbent Abraham Lincoln and his opponent George McClellan. It was the first large scale mail-in voting experiment that allowed soldiers on the front lines the chance to vote.

Since then, all military personnel who serve overseas or outside their home state have used absentee ballots.

“During my 10 years of service I was constantly moving from state to the state being stationed on different bases and I voted in the last two elections through the mail,” said Julio Garcia, 36, a former New York resident who moved to Fayetteville, NC last year.“It’s an amazing privilege to have as a soldier and it’s a process that shouldn’t be questioned. If it wasn’t an issue during a civil war then why would it be in a pandemic?”

Not only did President Trump question one of the oldest alternative procedures for in-person voting in the United States, but he condemned it with no reliable evidence. Some New Yorkers were taken aback by the president’s unprovable statements, but not surprised by them.

“When he said that on live television, I remember getting chills down my spine and being dumbfounded by the audacity of his statement,” said Boris Konan, 33, a Harlem resident and history teacher at McNair Academic High School in Jersey City, NJ. “But I can’t really be surprised though. I trust the process but after hearing that I’ve changed my mind about mailing my vote in. I’m going in person instead just to be safe.”

Since there is an unprecedented number of absentee ballots that need to be counted, it is unlikely that we will know the official result on election night. As results start coming in, the 2020 Election has become less of a sprint and more of a marathon. For New Yorkers they are ready to wait for as long as it takes even if it takes months to find out the next president of the United States.

“As long as they count the ballots right then I don’t care if it takes until the end of the year,” said Bryan Fuller, 71, a retired political science professor at Manchester Community College and Sunset Park resident. “Our democracy and our well-being as a country are on the line and that is worth waiting for.”

Since each state has its own laws that dictate when they can begin counting their votes, official results can potentially take weeks to be announced. In several states, including Washington and the key swing state of Pennsylvania, officials are restricted from counting mail-in votes till the day of the election.