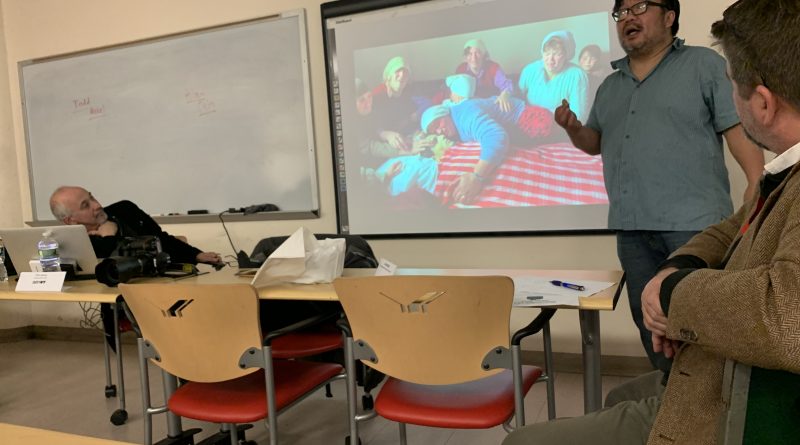 York College’s Journalism Department  hosts another photojournalism talk with guest speakers Todd Maisel and Alan Chin. The Feb. 26 event, moderated by Journalism professor Tom Moore, had Maisel and Chin discussing the power that images hold and the messages behind every shot taken.

Maisel is an award-winning visual journalist, who has been in the photography business for 36 years. He has spent 18 years working with the New York Daily News as a staff photographer before the photo department was demolished. He is currently the Breaking News Editor at AM New York.

Chin, on the other hand,  is a freelance photojournalist who has done reporting for The New York Times, Newsweek, Newsmotion, and BagNews. He has captured photos from Afghanistan, Iraq, China, Central Asia, Ukraine, and many other places around the world. Chin has followed the Civil Rights Movement, the aftermath of Hurricane Katrina, and has covered the 2008 Presidential Campaign.

Maisel also photographed scenes of the collapsed World Trade Center in 2001, and the earthquake in Haiti in 2010.

Maisel, who serves as the Vice President and Newsletter editor of the New York Press Photographers Association (NYPPA), said he has a degree in journalism but went back to school to study photography and visual arts.

“I have decided a long time ago that I need to learn how to do both,” Maisel said.

Chin who is also an adjunct professor at Columbia University Graduate School of Journalism, said that journalists have to be able to utilize the different platforms of journalism.

“You can’t just do one thing anymore,” Chin said. “You kind of have to be objective about all traits. It’s hard to even be good at one thing, let alone be good at five or six things, right? So, my advice on that is that don’t be overwhelmed and don’t be intimidated, because believe me, even now at my age, sometimes it feels overwhelming.”

A  four-story building in Chinatown at 70 Mulberry St that broke out on Jan. 24, tore through a 3-alarm fire, damaging tens of thousands of historic documents in the process. The building was home to some Chinese organizations and 85,000 artifacts of the Chinese American history were kept on the second floor of the building. Maisel was the only photographer and journalist allowed on the scene to document the event after the fire broke out.

“Sometimes it’s timing, and sometimes you’re just watching for things,” Maisel said. “It’s like playing football, you get the ball, you are trying to get through the lines and there’s your opening.”

Chin, born and raised in Chinatown, noted that his father was an active photographer in the 1970s. He showed the class photos that his father had captured of Chinatown, during the 70s and explained how Chinatown is different now, compared to how it was when he was growing up.

“It was a very different time in New York,” Chin said. “There was a lot more racism, people would make fun of us, people would get into fights. The Chinese old ladies especially would often have their purses snatched. New York in the 70s, was in some ways wonderful, in other ways, there was a real dark side to it.”

“For me, the camera was always a key or a passport, or a ticket to anything,” Chin said. “So, I show you this to communicate a little about the power of photography and why it matters.”

For Maisel, capturing images of the collapsed World Trade Center helped to define who he is as an individual. Maisel showed photos of ground zero to the students as he recounted the life and death experiences he witnessed, including that of a man buried alive under the debris.

“I talk about photos that define who you are, and what you do for the rest of your life after that, and 9/11 is like the defining moment for me,” Maisel said. “That has been a defining moment for me because I have seen so much violence and so many things in my life, but, in all my life, nothing equals that. So that led me on a new path.”

“This really defined things for me, not just the photography but the message and the ability to tell people what’s going on in the world, became that much more important,” Maisel added.

According to Maisel, photographs shed light on the overall message that you are trying to send out to the people who will be looking at the images that you have captured.

“This is what I want to get across to people- the suffering,” Maisel said. “Not the dead guy on the floor, but the people left over, who have to live with this, and try to get the message out there. I don’t care who you are, or what color you are.”

At the end, Chin  provided students with tips on how to be a photojournalist as well as advice on how to thrive and be one’s best self in the industry.

“It’s really important as journalism changes that you give it your all,” Chin said. “Maybe you’re not going to be a full-time journalist, but you can freelance, and you can do those four stories a year that you really care about, and you better do them just as good as a staffer or a full-time person would.”