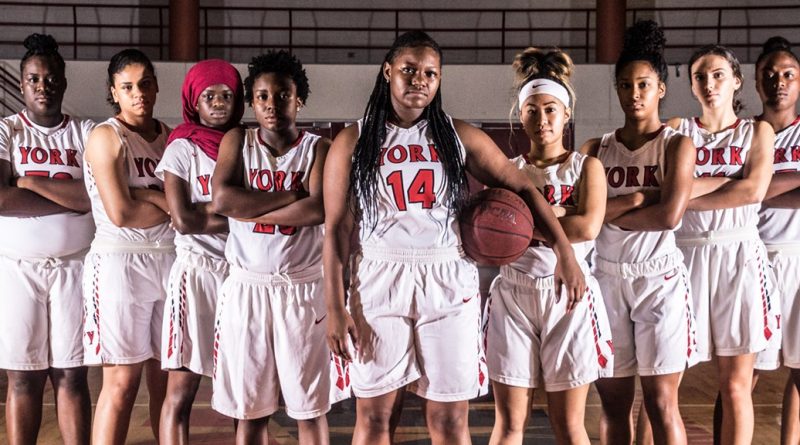 With November underway and the cool breezes of winter making its way, winter sports are right around the corner for York College.

The men and women’s basketball seasons are set to begin soon for some exciting action on the court.

Both teams are ready to begin the coming season following an offseason of hard work and preparation. The theme this year seems to be freshmen joining the team and getting accustomed to college regimen.

The women’s team is looking to continue their progression after earning six more wins last season from the previous year. Led by their second year head coach, Anastasia Bitis, the Lady Cardinals are primed to embark their names within the City University of New York Athletic Conference.

When asked about some of the team’s points of emphasis for the season, Bitis stressed the importance of establishing good team culture.

“The biggest thing we are focusing on right now and is definitely part of our priority list is our culture, she said. “We really want to emphasize hard work, commitment, and playing like a team. People have various definitions, but for us that is coming together as a family and started fresh. I feel like this is our year to start from scratch because we have a really young team.”

The coach’s mentioning of a young team can’t go unnoticed as she is bringing in seven freshmen on a team with one lone senior, Sheahna Roscher, is part of the

Some would think leadership could be a concern factoring in these components, but not Bitis. She isn’t specifically looking to another player to fill a leadership role. Instead, the coach is looking for multiple players to fill in various roles within the team.

“I think leadership is an interesting topic, Bitis said.

“(Leadership) is  not necessarily based on age. It’s really about the focus you have, what your drive is, what your goals are, and how you can pass that on to others,” Bitis said “We’re not looking for one person to be our leader. We’re looking for everyone to step into different parts and have ownership over different parts of our team.”

For the men’s basketball team, third year head coach Nolan Adams has his sights on having a great regular season and making a run in the postseason. He said that getting there will require a list of objectives getting accomplished.

Adams pointed out solidifying their defense and putting up more points on offense using interchangeable parts that can spread the floor are two components that will lead to success.

Like the women’s coach, Adams emphasized the importance of keeping a good team culture throughout the season.

“The biggest thing for the team this year is camaraderie,” said Adams. “I think in the past we’ve had a combination of talent, but we really didn’t have that unity we needed. Adams also noted that there is some new and young students as an addition to the team that had been missing in the past seasons.

“We have a lot of youth which is exciting because it’s my first time as a coach here at York I have a chance to coach real freshman, said Adams. We have a talented group of freshmen coming in that are being led by a talented group of seniors. So it’s an interesting mix we’re really excited about this year.”

The student body has embraced the young guys, showing their appreciation during Midnight Madness.

“So far the kids are loving it,” said Adams. “The community here and the student body has really embraced them. After coming out to the Midnight Madness event and getting to know the guys, they’re really loving it.”

On the women’s team, freshman guard Ellma Hodzic is a player that has what it takes to take the team to the next level, according to Bitis. Mac-Dege Dessources, another freshman, brings height, toughness and will produce for the next coming years as a walk-on, Bitis added.

On the men’s team, Devine Chisholm is a freshman guard who is a 1,000-point scorer in his high school career that is ready to implement his force in the offense, according to coach Adams.  Sophomore forward Akil Vaughn is a two-sport athlete that defends and shoots very well, Adams added.

Be on the lookout for the York College Cardinals this upcoming season. Women’s season begins on Nov. 14 and first home game is Dec. 7.