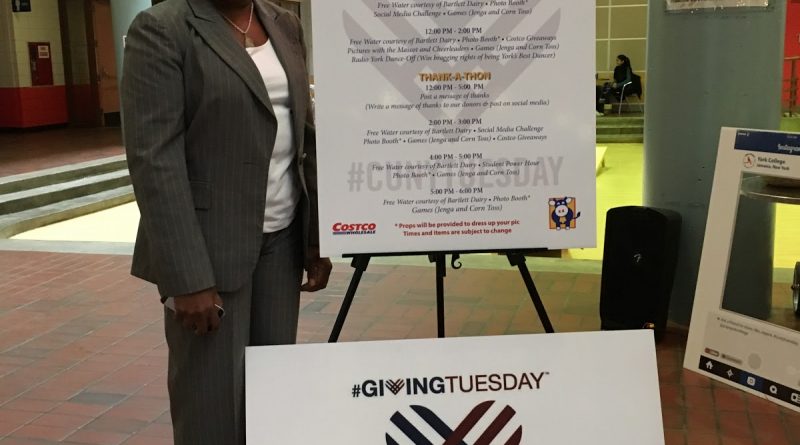 York College raised over $23,000 this CUNY Giving Tuesday with up to 131 donors donating specifically to York College, almost tripling the amount of last year’s donors.

York participated in the Giving Tuesday challenge, a 24 hours online fundraising campaign, to raise money for the college.

Geneen McCauley, the annual giving manager for Institutional Advancement, was one of the people who helped plan and encourage the York College community to donate for CUNY Tuesday.

She also hinted about a new campaign for students if they want to give to show that students can participate in their schools instead of just waiting for #CUNYTuesday to happen.

According to McCauley, a total of $5,200 was donated in the first four hours of the event.

“This year we’re hoping to be at $20,000,” McCauley said. “The first year we raised $3,200. Last year we raised $6,400, so we are expecting an increase since we’re both combining two different campaigns this year. We should expect a big increase.”

The event was held from 10:00 a.m. to 6:00 p.m. in the Atrium of the Academic Core building. Snacks, water, music and games were available for students to receive and participate in once they donated.

“It’s a day event,” McCauley said. “I didn’t want this event to stop during club hours. I wanted it to be something where if you had class at three you can still participate.”

McCauley said that the impacts that students make through fundraising for the college is bigger than getting snacks and water. She said the main purpose is for students to know that they are supporting their college and that their voices are heard.

“No gift is a small gift,” McCauley said. “Students do have power in their investments. It’s not a donation. It’s an investment in their school to have influence and have power in where the money will go. So if you want more programs to be developed, that donation will help build those programs so it’s giving you a voice through your financial situation.”

York’s Giving Tuesday website says “annual unrestricted giving is the most valuable gift to York because it allows us to allocate funds to the areas that are needed most. These areas include immediate scholarships, expansion of academic programs, faculty development, campus-wide technology access, and the upkeep of the campus and it’s classrooms.”

York’s #CUNYTuesday is open for anyone to donate and is not limited to York staff and students.