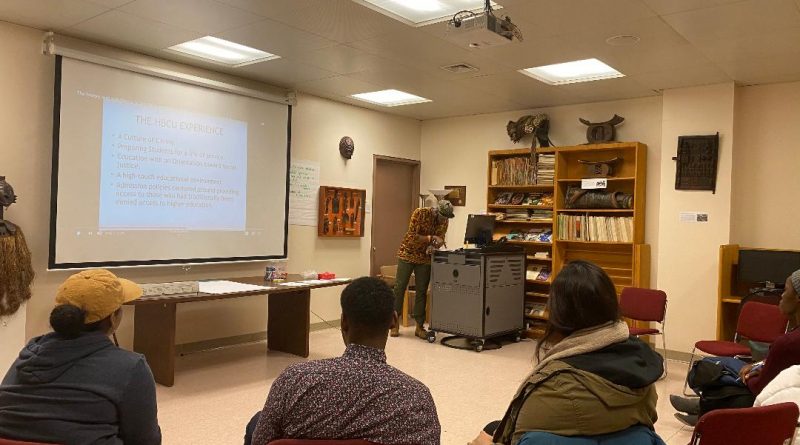 Students listening to Speaker, Joery Francios at the event

York College’s department of Student Activities hosted the second annual “Conversation For the Culture: HBCU Edition,” on Feb. 11, as one of the many Black History Month events that took place on campus.

The “conversation” at “Conversation For the Culture” served as a platform to discuss the experiences that students have at Historically Black Colleges and Universities (HBCU) and to discuss how students at York can express themselves through their campus experience and tie it to Civil Rights Movement activism.

“The goal was to create a space where students will be able to have conversations about the issues that are impacting them here in South Jamaica and also as students as a part of CUNY,” said Joery Francois, Manager of the Jumpstart Program in Student Activities.

The overall goal was to have students leave the room with knowledgeable and progressive steps that would help contribute to changes they envision happening on campus. Students brought up some current issues that the college is facing, ranging from the closed cafeteria to student involvement on campus.

“I realized that there are a collective amount of students on campus that think like-minded like me and see these issues on campus and realize that the baton is actually in our hands whether it be small or large,” said Christopher J. Reid, a junior and History major at York. “It’s important that we in some way, shape or form, we influence the way our college comes together and becomes something greater than it once was.”

The event started off with a video showcasing Dr. Martin Luther King Jr. ‘s “What Is Your Life’s Blueprint” speech from 1967 to students of Barratt Junior High School in Philadelphia. The speech given by Dr. King emphasizes the guidelines for students to fight for what they want in their lives to never give up, nor settle for less.

Another video featured a TEDxTalk from 2015, that featured Elwood Robinson, the Chancellor at Winston-Salem State University. Robinson discussed the idea of how HBCUs are the “warm blankets” of higher education, that provides a “culture of caring” for black students. Even though York College is not designated as an HBCU by the US Department of Education, some students believe that they do get a similar feeling of being at an HBCU, on campus.

“Whether it be black or brown students on campus I still get that feeling,” Reid said. “Especially from your notable professors; you get them when you go to different events on campus; it’s definitely there and it’s awesome.”

Some students have even gone as far as to note that York College is considered to be the “HBCU of CUNY.”

“From what it seems like, the future that is held for HBCUs, we have it here at York,” said Courtney Dawson, a York Alumni. “We’ve taken into a lot of things that they feel like they need to develop, we have it here. If we are dubbed the ‘HBCU of CUNY’ and we have the power to keep that energy here opposed to schools that might be lacking certain resources, we need to make the most of it.”

In regards to students advocating for change, Reid mentioned Interim President Berenecea Eanes’ “open door” policy, which allows students to communicate with the president during the hours the office is open.

Eanes had introduced her open-door policy with the York community last semester while adjusting to her new position at the college.

“I would ask students to do me a favor, to remember what it is like to be new, and if there is something that I need to know about, then they need to tell me,” she had said. “My door is open, my email is open, and there are tons of people here to listen, drop by, don’t be shy, let me know. If there is something that you wish, someone told you about York, then you need to tell me.”