Some may consider President Donald Trump’s acts on banning media from White House affairs an effort to win the war against media while others insist fake news lays among the goals of reputable news outlets. In an effort to combat “fake news”, Press Secretary Sean Spicer banned the New York Times, BuzzFeed, CNN, the Los Angeles Times, and Politico from attending a non-televised press conference on Feb 24. A decision that directly attacks the freedom of the press and mostly liberal news outlets.

Throw aside the surrealism of the White House’s decision and consider the jobs of those journalist reporting on Washington. It is likely that the New York Times and CNN were compensated for being barred from the event, but what about the recently developed Buzzfeed and their reporter who would explain to an editor they couldn’t do their job. It’s safe to say some reporters have the luxury of writing on this situation as an opinion piece, but the barned news organizations wouldn’t expect a White House reporter to write a 500 word piece on why they couldn’t make it to work.

The manipulation of the media continues and existed not too long ago with the Trump news coverage that touched down throughout the election period. Washington reporters were riddled with news stories and the possibility of turning on the television or picking up the paper to see Trump’s’ latest showcase of reckless rhetoric increased dramatically because of its sensationalism. Trump’s strategy throughout the race to the presidency included vocalizing almost everything other politicians think twice about before speaking. He discussed building a wall and deporting illegal immigrants claiming all had criminal backgrounds, avoiding direct dialogue about his relationships with Russia, refusing to release his tax returns, calling Hillary Clinton a “nasty woman,” and the list goes on. This showcases exactly what makes most broadcast/televised or tabloid news. Not necessarily all news heard on television involves sensationalism or murder, but the task of news media, as seen the the Society of Professional Journalists code of ethics, involves seeking truth and reporting it for the audience’s knowledge. The sensationalism of news events isn’t controlled by media, but rather depends on the access to information.

What occurred during the presidential elections is not representative of all news outlets, but serves as an example of how Trump manipulates media coverage. Take a look at Sean Spicer taking questions in Washington press conferences since the beginning of Trump’s presidency and the blatant lack of respect towards news organizations is noticeable. Instead of addressing the tax returns of Trump, he’d rather lecture reporters with a focus on “size doesn’t matter” in regards to the inauguration turn out, compared to President Obama’s, calling news coverage “shameful and wrong.” Consider empathizing with Glenn Thrush, the New York Times political reporter for Washington, as he challenged Spicer to give remarks on medicinal marijuana usage and refused to let the topic continue unanswered. Spicer replied to Thrush’s leading questions by saying, “ Glenn, this isn’t a TV program. You don’t get to just yell out questions,” and followed by saying “We’re going to raise our hands like big boys and girls.”

Saturday Night Live on NBC, as a long lasting live television entertainment show, takes aim at political jargon in forms of support for media outlets while skewering White House actions. In a skit featuring Melissa Mccarthy as Sean Spencer, Mccarthy comes off as ruthless and threatening to journalists in the room and shouting at Thrush multiple times mocking his attire. Not far off from the actual treatment of journalists in the White House press room who dare to ask probing questions to Spicer. Even though Spicer had little reaction to the SNL skit, Trump found the time to tweet at NBC showing his disapproval. 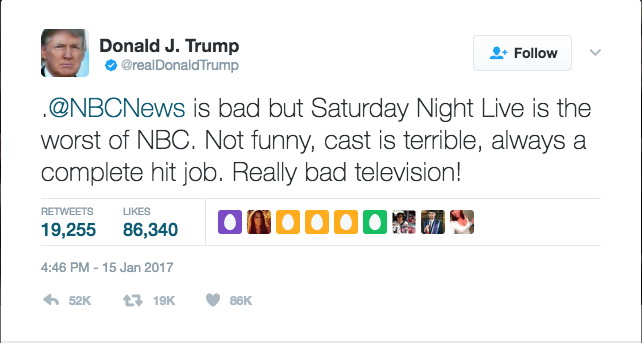 Trump’s twitter rampages have become commonplace for battering any organization opposed to his views, including a reaction to The Truth is Hard, a recent New York Times television advertisement showcasing the importance of the truth now more than ever. For only a 30 second commercial, it brings the views of “alternative facts” and disbands them with statements toward the Trump administration including “ The truth is his refugee policy is a backdoor muslim ban.” Of course Trump took to twitter asking the New York Times to report accurately and fairly.

Despite the efforts of the Trump administration to deter investigative reporting and the efforts of the Obama administration to suppress leaks, news organizations have grown stronger. The Associated Press and Time chose not to attend the Feb. 24 White House briefing when Spicer banned reporters from entering in solidarity with the banned outlets. The effort to seek the truth and practice journalistic ethics serves the greatest importance now while freedoms are under attack. Irresponsible usage of the term “fake news” and “alternative facts” are partially to blame for this troubling time for the press. While fake news exists online, the organizations called out to by Trump are considered left wing and therefore an enemy to Trump’s movement of fear.

One thought on “A Movement of Fear: Trump vs Media”