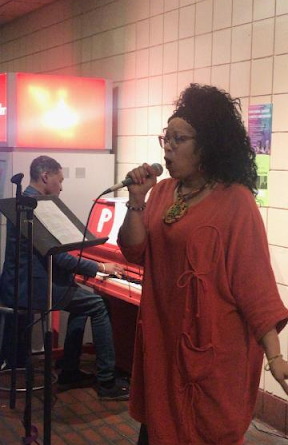 The sound of music takes on a whole new meaning on campus with a cafe-style piano performance series on March 5, hosted by the Music Department at York College.

The mini-concert was held to inaugurate the new Pop-Up Piano at the Cardinal Cafe showcasing students from the Music department displaying their talent to the entire campus for free. Director of the Music Program Dr. George Lam and Music Professor Mark Adams created an opportunity for any student on campus to play the “Pop-up Piano” whenever they want by strategically placing it near a public popular seating area. Student George Lewis played a piece on the piano titled “Waltz for Nicky,” and his peers Ethan Menjiva, Micahal Evens and Titus Dewlley played pieces in a contemporary style that engaged and entertained onlookers. Some of the song selections played on the piano were “All The Things You Are,” and “Just The Two of Us.”

You may have noticed the bright red piano near the Cardinal Cafe on the second floor before. Even when the piano was first nestled near the cafe it was hard to miss and even more noticeable when someone would sit on the piano bench and fiddle with the keys. Both Adams and Lam believed the idea of a “Pop Up” piano would allow access to music from Performing Arts majors and medleys from students wanting to make their own sound.

The piano attracts students to sit down to play a few chords which makes one’s ears get drawn to the sound. It causes the eyes to become fixated on who is trying their hand at playing the piano. This combination of the response to those interested in playing the piano and the reaction to the makeshift musicians alongside the piano placement is exactly the kind of engagement Adams and Lam want passers to experience.

Another opportunity Adams and Lam sought out to provide by placing a piano adjacent to the atrium was to highlight the students in the Music Program. At the concert, Adams illustrated his pianist abilities alongside music majors, such as songstress Deggra Stratton who serenaded the audience while Adams played piano in the background.

The very sentiment is felt by Professor Lam who brought this unique program to York College for the purpose of enriching students and enhancing the campus through meaningful music.

“I was inspired by the pop up [pianos] all over the city, in prominent places promoting music.”

When asked why he thought it would be a good idea to put a piano in such a high traffic location near the Cardinal Cafe, Professor Lam shared that he thought music could “Liven up the atmosphere [like a] coffee house.”

Professor Lam thinks having a piano in an area frequented by students sets the mood for public performances and public permission to have an informed interactive music hub on campus.

Professor Lam said thanks to a grant from Auxiliary Enterprises, (a competitive grant initiative to fund various campus programs such as the Pop-Up Piano), students can expect more music through the access to the public piano and mini-concerts from the Music Department’s own talented performers. So whether you find yourself wanting to touch the piano keys near the cafe or enjoy music majors play, the sound of music belongs to all at the York campus to experience and enjoy.