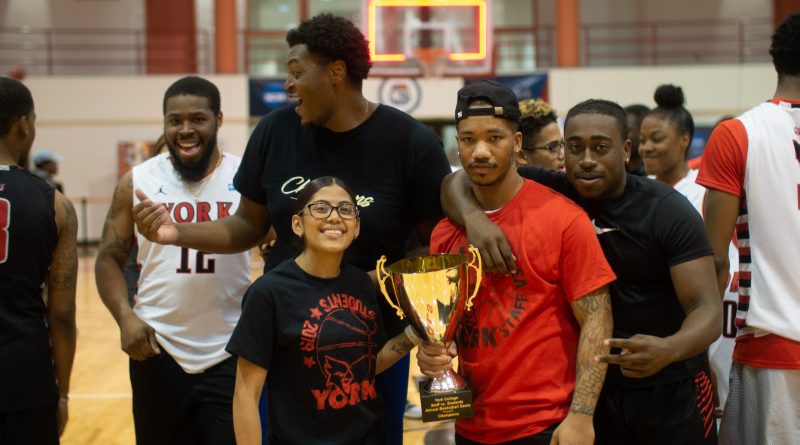 York students avenged last years loss with a blowout 75-45 victory against York staff members in the annual staff vs students game on April 17 in the York College Gymnasium.

The game, hosted by Student-Athlete Advisory Committee(SAAC), is an anticipated event and great opportunity to display school spirit here at York. With this year’s victory, the students reclaimed the trophy after a three-point loss last year that kept the trophy in the public safety office. Kevin Caraballo, a York student senator, participated in the game and gave his thoughts about this years victory.

“The game was amazing,” said the senior. “Last year we lost by three points but this year we won. So it was a good turn out. It was a good game. Hopefully, everyone enjoyed themselves.”

The student team, coached by senior guard on the men’s basketball team Taishaun Forehand-Jenkins, certainly enjoyed themselves the whole way. They controlled the pace throughout the entire game.

The first quarter ended with the students up 19 after stiff defense that led to fast break buckets. Most fast breaks were led by the main ball handler Kwasi Koranteng.

The wheels started to fall off for the staff during the third period after more threes began to rain down for the students.

Fan favorite Kevin Rodriguez racked up four-three pointers in the quarter, notching three in a row at a point. Fans quickly responded each time Rodriguez touched the ball to see how many more shots he could hit with his unorthodox jumpshot.

Students kept the lead in double digits for the rest of the game. The lead rapidly surpassed 20, then 30 by the final buzzer.

The coach of the losing side, director of athletics and recreation Denee’ Barracato, wasn’t in bad spirits after the defeat. The athletic director gave her thoughts on what an event like this does for the school community.

“The significance of school spirit is paramount to the success of our programs and the support and pride our students and staff have for sports at York College,” she said. “This event provides all participants with an opportunity to encourage school spirit and engage in good old competition.”

She also added what the staff team has to do to come out victorious during the next staff vs students game.