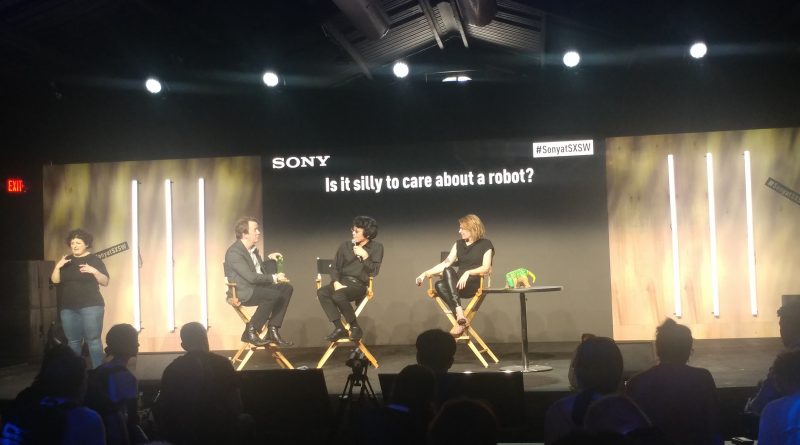 The South by Southwest Conferences and Festivals  was the place to be if you wanted to see the technology of the future. There were plenty of exhibits throughout the Austin Convention Center but the real fun was discovered as I was leaving the center to look for lunch on the first day.

It was 80 degrees out and near the entrance of a building with a large Sony sign on the side, there were two staff members handing out tickets for free beverages. That was enough to bring me in, unaware of what was waiting inside.

Inside, near the entrance, there was a large pit with four puppies inside. But wait, they were robots. The first exhibit was called Aibo. Aibo has been around since the late 1990’s but were discontinued in 2006. Last year, they were brought back in Japan and featured at this event.

Each robotic dog had sensors on their head and backs so that they can react when pet. They also had the ability to track movement, walk, and distinguish between people, toys, and food.

There were about half a dozen guests sitting and playing with the dogs. Even one of the curators were in on the fun, getting each dog to do different tricks such as standing up and playing dead.

Further into the building were some tables with tiny robots on them. They were rotating around on tables and every now and then, they would speak in a weird robotic language.

Whenever one would speak, another one nearby would usually respond with it’s own series of sounds. This was when one of the curators walked over and began talking about how these robots have been developing their own language and were slowly creating their own culture.

“A few years ago they began speaking to each other and over time developed their own language. Not even their developers understand it. And at each event they go to, they see new people and they learn and remember,” he said.

Then came the whispers of the robotic uprising throughout the room.

“The robots will take over.”

“The robots are going to take all our jobs.”

Despite an air of fear and shock, everyone who visited this exhibit displayed curiosity and amusement. Guests would walk in a circle around the robot, which would in turn rotate on its pedestal and follow them.

The robots head would tilt and move, tracking the movement of guests and in a way, responding. After spending some time walking around the exhibit, I noticed that there was one robot that’s been rotating and watching me the entire time. So I did what any person would do in this situation and initiated a heated staring contest with it.

I did not win. Most robots do not blink.

Once I became bored of these robots, I moved onto the main area of the Sony building. It was a huge room with a 200-seat theater, a bar, and space for numerous games and exhibits.

I took a seat just as one panel was beginning and tried my best to wrap my head around it. The panel was titled Is it Silly to Care About a Robot and discussed the emotional bond between a human and robot.

While it was a panel designed to discuss the not so far future, it felt more like the plot of a James Cameron film than anything else. It made people think though. Not just about what robots can do in the future, but how they interact with humans as well.

For those who have seen any of the Terminator films, it’s known that a number of things can go wrong with developing robots. These panels created a dynamic for what needs to be done for a well developed future.

If this event was any indication, it was proof that Sony is ready for the future. We might not be ready for Sony’s preparedness though, for a long long time.